#1. GSH is required for the proper functioning of APCs – Antigen Presenting Cells which engulf viral-infected cells, and then process the viral antigens for presentation and correct identification by T-helper cells and Killer (cytotoxic) cells.

#2. GSH is required for the activation of CD4+ cells (by APCs) to become T-helper cells, which then initiate both the cellular (ie. by cytotoxic killer cells) and humoral (ie. by antibodies) defence against viruses.

#3. GSH is required for the activation of CD8+ cells (by T-helper cells) to become Killer cells, which then kill the cells infected by viruses.

#4. GSH is required for the activation of B-cells (also by T-helper cells) to produce antibodies against the virus. 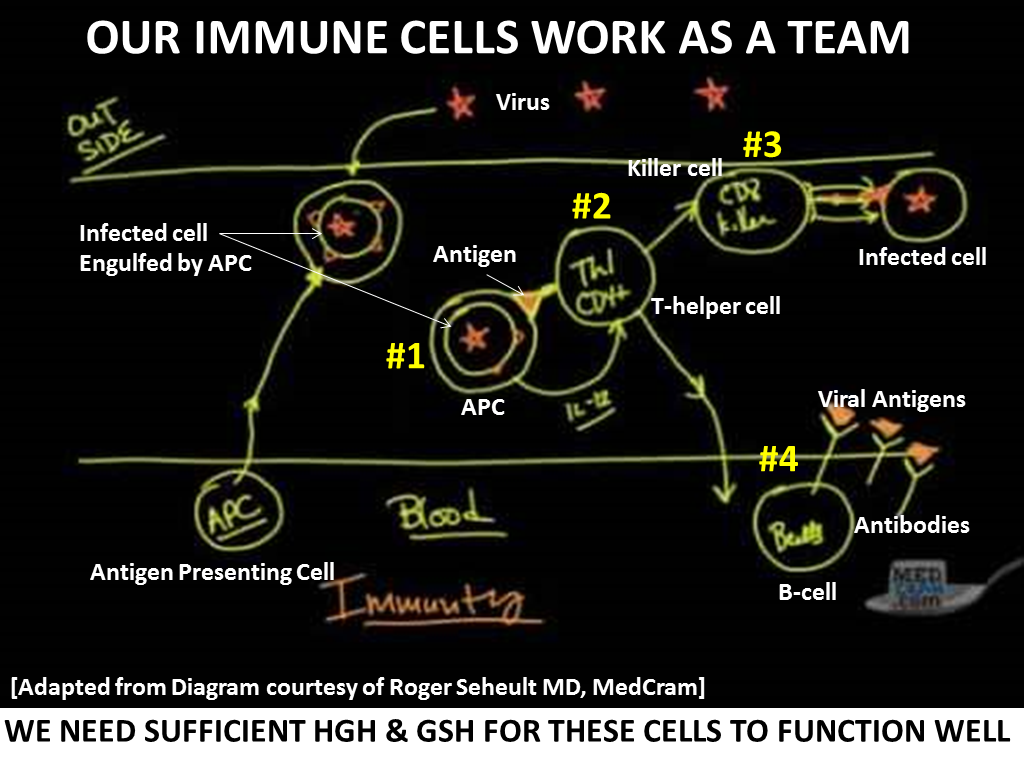 GSH reduces inflammation caused by the viral infection, without causing the same adverse reactions like ibuprofen does (Ibuprofen is an anti-inflammatory drug partly blamed for the high COVID-19 death rate in Italy).

GSH reduces oxidative stress, which would otherwise increase the virulence (aggressiveness) of the virus.

Our body produces Glutathione to maintain good health and fight infections. Glutathione has many important functions for the body, the most important of which are listed below.

1) the most important intra-cellular antioxidant

It has hundreds of other functions to keep us healthy.

Unfortunately, as part of our programmed ageing, its production declines as we age.

After age 60, the deficit is significant (at least 40% deficit).

Because of the decline in production, the balance of Glutathione as you age is:

The range is between the healthy and unhealthy in each age group. Among the healthiest, the decline is slow and they have higher levels of GSH despite their age.

In comparison, there is no such predictable difference in vitamin C levels with age because we do not produce vitamin C, and any difference is due to dietary intake and factors that cause the body to utilize it. An old person who consumes a lot of vitamin C will have more than a young person who does not.

If you look at the graph of THE RISK OF DYING FROM COVID-19 (see below), you will find the elderly (especially those with co-morbidities or chronic diseases) are most susceptible, and the young rarely die from it. 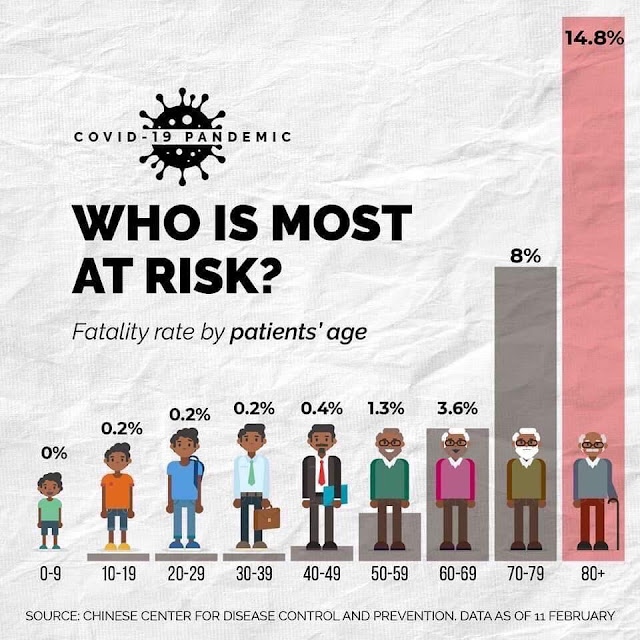 While there are many factors contributing to this, understanding how our immune cells function against viruses makes us realize that the decline in GSH is one major reason.

The older people have much less Glutathione, and those with co-morbidities have the least.

But we may be able to beat the statistics by boosting our Glutathione.

There are several ways to boost GSH. Unfortunately, although GSH is found in food (plants and animals that we eat also produce GSH for protection), it is poorly absorbed and gets digested instead. The same applies for most Glutathione supplements.

Scientists have discovered that it is possible to boost Glutathione production even in older people by providing our cells with the amino-acid cysteine, which is the component of GSH least available from the diet. It is scarce in foods compared to other amino-acids, and it is fragile. It gets denatured easily when the food is cooked. So you can get some cysteine if you consume raw cysteine-rich foods like meats, eggs, fish and poultry; cruciferous veggies like broccoli, Brussel sprouts, kale and cauliflower; and allium veggies like garlic and onions.

A convenient way to boost Glutathione long-term is by taking supplements containing the stabilized forms of cysteine (ie. not denatured, well-absorbed, and made available for the cells) as the precursor for the cellular manufacture of Glutathione, instead of taking Glutathione supplements (because these are poorly absorbed).

In fact, exogenous Glutathione (from outside – ingested or injected) has to be broken down to its component amino-acids; these are then assimilated into the cells and Glutathione is re-synthesized inside the cells where it is most needed. The cells are equipped to make and “export” Glutathione but not to “import” it.

Another major factor, in tandem with GSH, is the decline in HGH (Human Growth Hormone) as we age past 20.

It is present at high levels in growing children, and declines at the same rate as GSH after we stop growing at about age 20, to very low levels in old age.

And just like GSH, HGH is also required for the optimum functioning of our immune cells – APCs, T-helper cells, B-cells and Killer cells as explained above.

The simplest way to boost HGH is to ensure you get sufficient, good sleep, as HGH is mostly secreted during sleep, following our biorhythm. You need to sleep early (definitely before midnight) to achieve that. However, as you age past 40, even this may not be enough to maintain HGH levels sufficient for optimum immunity.

To boost HGH higher, you need to see anti-ageing doctors, as HGH is also the most important anti-ageing hormone!

0 thoughts on “GLUTATHIONE (GSH) & HUMAN GROWTH HORMONE (HGH) ARE CENTRAL FOR OUR IMMUNE DEFENCE AGAINST VIRUSES.”

HOW TO AVOID COVID-19 & SOME OTHER VIRAL INFECTIONS

HOW TO AVOID COVID-19 & SOME OTHER VIRAL INFECTIONS [DR AMIR FARID ISAHAK]   [This article was written during the lockdown due to the COVID-19 pandemic, April 2020]. Viruses are inanimate matter than gain “life” Read more…

Human growth hormone maintains the health of many organ systems, and also acts as a biomarker of ageing. THIS is the second article on hormones that are important for good health. In the first installment Read more…

Can we tweak our genes to become younger, healthier and live longer? APART from live cell therapy (see Rejuvenation therapies, Fit4life, May 31, 2009), the next frontier of anti-ageing therapy is genomics and genetic modulation. There are Read more…